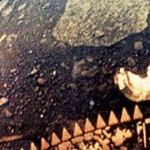 You are looking at an actual photograph from the surface of the planet Venus. Though obtained from a NASA web page, this is not a NASA photo. It is a Soviet era photo. Try as you may, you cannot find such a photo made by a NASA spacecraft. Why? Because NASA has never made a successful landing on Venus with a craft capable of taking photos and transmitting them back to Earth. They did make an accidental landing of a probe (Pioneer Venus 1). It was accidental because the Pioneer Venus 1 dropped off 4 probes that were not designed to survive all the way down to the surface—but one did. The others were destroyed by the immense heat and pressure of the atmosphere. So, NASA accidentally dropped something on Venus, but the Russians actually landed there.

Not only did the Russians successfully land on Venus, they did it 10 times! And that, my friends, is a gigantic mystery. . . . Read Complete Report