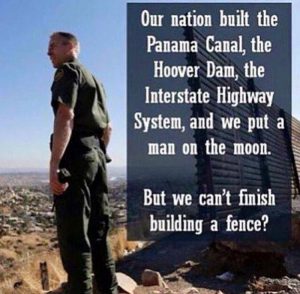 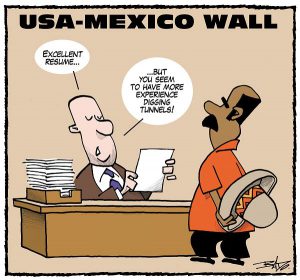 USA-Mexico wall
-Excellent resume, but you seem to have more experience digging tunnels!

The down-payment on construction of a border wall that President Donald Trump had sought has been dropped as part of the latest GOP proposal for a spending bill to prevent a government shutdown at the end of this week.

The latest offer by Republicans to Democrats in 11th-hour negotiations omits the $1 billion the White House had asked for to begin construction on a wall on the Southern border, three aides on Capitol Hill told NBC News. The request, a last minute demand, had threatened to blow up the negotiations as Democrats said that they would not pass a government funding bill with money for a wall included . . . Read Complete Report

(Part 1) Cartels’ Control On The Border, Political Correctness or Corruption?

(Part 2) Mexican Drug Cartels Should Be Labeled As Terrorist Organizations