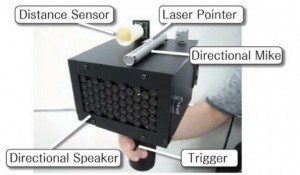 Just when you thought it was safe to voice your opinion. . . editor

Japanese researchers have created a hand-held gun (pictured above) that can jam the words of speakers who are more than 30 meters (100ft) away. The gun has two purposes, according to the researchers: At its most basic, this gun could be used in libraries and other quiet spaces to stop people from speaking — but its second application is a lot more chilling.

The researchers were looking for a way to stop “louder, stronger” voices from saying more than their fair share in conversation. The paper reads: “We have to establish and obey rules for proper turn-taking when speaking. However, some people tend to lengthen their turns or deliberately interrupt other people when it is their turn in order to establish their presence rather than achieve more fruitful discussions. Furthermore, some people tend to jeer at speakers to invalidate their speech.” In other words, this speech-jamming gun was built to enforce “proper” conversations. . . . read complete report