May 1, 2012 The OCCUPY Movement : The Other Side (video reports) by Dennis Crenshaw 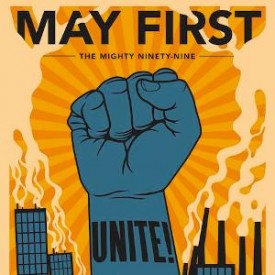 The major financial problems in this country ARE caused by a combination of a corrupt good-old-boy political system, the money controllers and the capitalist system as operated today. The times are changing.  For one thing corporations will eventually have to learn to share their profits with the people who actually do the hands on work, not pass it along to Corporation flunkies. Unfortunately, they will have to be forced one way or another into accepting that position. The second step is that we MUST get rid of the Federal Reserve System and get our money back on a sound track… backed by precious metals.  The occupy movement is a great start in waking people up to what has been going on in our Country’s political and financial world. . . .  the elitist controllers and their pals can’t stand it! They will fight it tooth and nail. . . EDITOR

Covering the Event without  the “Commie control” scare tactics of the far right.

The Occupy Movement identified one of the major problems in our system, the banking and financial institutions who have used their Washington thugs to pass bills and regulations which allows them to strip the American people of their assets.  Only their target group is wrong.

It’s not the top 1% who are causing our problems. It a A SMALL PERCENTAGE at the top of that 1% who control the situation.  By blaming the “top 1%” and “corporate greed” the Occupy movement made a big mistake and opened a large can of worms.  This is a direct challenge to the GOP and their talking heads like, Rush Limbaugh, Sean Hannity and David Horowitz who consider themselves to be members of the controlling elitist whose sole media job is to keep such talk under wraps. Check out their coverage of the Occupy protest movement.  They are screaming negative vibes about the Occupy Movement louder than at anything Obama has done. This should send up red flags that they have more personal agendas in the fire when it comes to the amount of energy and time the elitist media’s talking heads spend shouting down the Occupy Movement.  They didn’t “report on the “10s of thousands” of peaceful protesters that turned out across the nation.  People of all walks of life. Instead they reported the one or two bad things that happened and spent the rest of the time calling the protesters “Commies.”  And to recycle the old “Red Threat” from the so-called cold war. Even that isn’t new! The gotta be scared s…less!

Over the years any time the controllers felt a threat from the populace they dust off the same playbook they have used since Joe McCarty’s hearings after World War II of the age-old tactic of claiming that the “trouble makers” are controlled by Communist and Socialistic organizations. To have fallen back to using this ridiculous, outdated  propaganda proves they feel like they are in dire straights and needed something that sounds frighting to send to the sheeple.

Problem is the protests numbering in the “10s of thousands in cities and towns across the nation” (the amount of people reported protesting across America on May 1).

They would have us believe that these 10s of thousands of people are all of communist bent or controlled somehow by some evil “red cells” who have anxiously been waiting in the wings for the past couple of decades for a chance to gain power in the United States;  And in the Occupy Movement they see their chance to spring out of the closet!  Bull Shit.

GOP and such wake up. Communism went out of style years ago. Everyone knows it failed.
Hell, even your hero Ronny Ray-Gun knew it after Nancy told him. This is the 21st century, it’s radical Islam that attracts the crazies today.

Sure there are a few burned-out retreads from the 60s and 70s vocalizing about the Occupy Movement… but a plot?  Give me a break. The Controllers flunky’s propaganda wants everyone to believe that those supporting the movement are a bunch of mindless puppets blindly following the resurrected communist  from Occupy protest to Occupy protest. Actually these the same propaganda tactics used to turn the nation against the Branch Dravidian religious sect of Waco Texas and “the Patriot Movement” with the Oklahoma bombing.  Scare tactics to turn the populace against anyone that disagrees with the controllers. Just use interchanging bad guys.

So what if some left-wing groups are using Occupy to get in their licks?  That’s the American way. That doesn’t make the entire protest a “Commie” protest but it sure does play into the hands of media hacks like Rush Limbaugh. Too Bad.

If you want to know the true make-up of the protesters, look at the videos of the actual people protesting. Of course unless it’s a video of protesters being rowdy and being arrested you will not see any of the videos of the marches on you cable outlet.  Continuing our pledge to be your alternative news source presenting information THEY refuse to publish we have put together the following  video reports from around the Country.

Who are the protesters?

Many are young collage students who have no hopes of a job once the graduate.  There are a lot of homeless people. They are at the bottom of the food chain and certainly see a problem. Then there are everyday working people who are totally frustrated.

The Republican-or-die-crowd  are screaming their heads off about a “Communist Movement.”  They would have you and I believe that the Occupy Movement is under the control of communist organizations. This isn’t the first time I’ve heard this. But their fears never pan out. Over the years I have watched these fascist GOP party types claim that any movement against the establishment by a group of vocal people is a “commie plot.”  The right wing nutcases never want to believe that people are smart enough to know what’s going on and, when really pissed off at the controllers and their pals, will think and join others in protest on their own. Yesterday, according to one reporter, “tens of thousands of protesters turned out in peaceful protest all across the nation. If there are that many “commies” in the country, or if the small number of die hard  commies and socialist of America can cause the kind of turnout we had yesterday I wonder why have the Controlling fascist fraction of our government made so many inroads over the past 40 years, yet the commies, for the most part, were forced out years ago.?

Do I believe there are far left-wing people involved in this movement? Of course I do. The left wing nutcases will join a movement such as this in a heart beat.  It’s anti-establishment and that’s what they represent.  Do I believe, as those in the Republican Party want me to believe, that the Occupy Movement is “controlled” by these left wink nuts. No,I firmly believe that most of the rank-and-file people protesting under the Occupy banner are people, like myself, who realize that  THE TOP BANKERS and FINANCIAL CONTROLLERS ARE A LARGE CAUSE OF OUR COUNTRIES FINANCIAL PROBLEMS TODAY.

So, after listening to the mainstream press scream in our ears that the Occupy movement is nothing but a bunch of commies, lets take a look at what’s going on out on the streets.  As you watch this extensive video report look at the people.  Commies? Gimme a break!

After you watch the live videos if you still “think” this is not a peoples movement that’s O.K.  But I personally think that line of thinking is the product of rightist propaganda. . . EDITOR

WE “THE PEOPLE” MUST OCCUPY EVERYWHERE!

“Video documentation by local activists and independent media shows that police officers and county deputies from across Minnesota have been picking up young people near Peavey Plaza for a training program to recognize drug-impaired drivers. Multiple participants say officers gave them illicit drugs and provided other incentives to take the drugs. The Occupy movement, present at Peavey Plaza since April 7th, appears to be targeted as impaired people are dropped off at the Plaza, and others say they’ve been rewarded for offering to snitch on the movement. , , ,” Read Complete article.

“Around 400 protesters have been confronted by police who used tear gas, causing hundreds to scatter on May 1. Some activists blocked streets throughout the day and vandalized two banks, a news van and police vehicle. Nine people were taken into custody in Oakland, California, after hundreds of people took to the streets. Police reportedly used Taser against at least one of them. Officers ordered protesters out of the street after firing the tear gas and “flash-bang” grenades. RT’s correspondent Madina Kochenova has the latest from Los Angeles.”

And the G8 Runs Away

Published on Mar 6, 2012 by AmericasMaji

“Did Occupy Chicago come into the equation to move the G8 to Camp David? According to CBS Chicago , that is a question that was dodged by the President of the United States.”. . . Read Complete report

May Day Protests NYC: ARRESTED for Standing on the curb! Cops on Power Trip. (occupy, OWS)

Commie controlled mindless people one and all… RIGHT! . . . EDITOR