Robotics: An Uncanny Mind: Masahiro Mori on the Uncanny Valley and Beyond 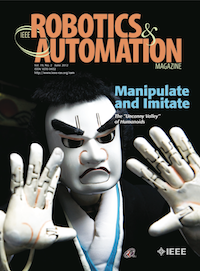 Photo: A version of this article originally appeared in the June 2012 issue of
IEEE Robotics & Automation Magazine. SOURCE IEEESpectrum.org

Interesting article that needs to be referenced with our “Robots Replacing Robots” research . . . EDITOR.

In this guest post, Norri Kageki interviews Masahiro Mori, who, as a professor of engineering at Tokyo Institute of Technology in the 1970s, proposed the now-famous concept of the uncanny valley. [Read the first authorized translation of his seminal article here.] Mori’s insight was that people would react with revulsion to humanlike robots, whose appearance resembled, but did not quite replicate, that of a real human. He called this phenomenon bukimi no tani (the term “uncanny valley” first appeared in the 1978 book Robots: Fact, Fiction, and Prediction, written by Jasia Reichardt).

The uncanny valley has become more relevant in the past few years since robots that actually look and move like humans are starting to become a reality. . . . EDITOR