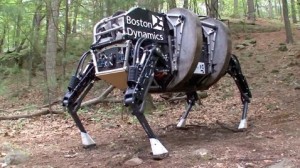 A robotic pack mule being developed for the Pentagon by Boston Dynamics could give U.S. troops a leg up in terrain too rough even for military vehicles.

The mechanized four-legged robot, capable of carrying all the gear soldiers and Marines might need in combat, still faces two years of on-the-ground testing, but it appears to be the high-tech equivalent of the pack mule that the Defense Advanced Research Projects Agency, or DARPA, has been looking for. . . . Read Complete Report