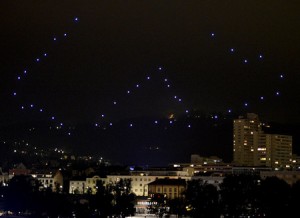 We’ll never be able to believe any future UFO night time videos from any source. The fakesters will have a field day with this technology . . . EDITOR

We were pretty impressed with KMel’s quadrotor performance at Cannes back in June, and the idea of using swarms of quadrotors to create light shows seems to be catching on. At the voestalpine Klangwolke Cloud in the Net festival in Austria, a swarm of 50 quadrotors teamed up to put on a giant animated show in the night sky. . . . Read Complete Report

Quadrocopters turn into pixels at the voestalpine Klangwolke and form 3D-Modells in the sky. As a world-premiere, the Ars Electronica Futurelab has managed to fly a formation outdoor with so many quadrocopters, painting some moments of magic into the nightsky of Linz. . . . Text posted with video to youtube