For downloads and more information visit:http://www.journeyman.tv/?lid=65475

My research indicates that there is one possible source for migration to the Americas that the establishment scientists, educators, or accepted researchers will never mention. To learn of that possibility you have to listen to the oral history of the tribes.  . I’ll put up a link to my research on this amazing subject and my findings at the bottom of the page . . . EDITOR

ScienceDaily (July 11, 2012) — Scientists have found that Native American populations — from Canada to the southern tip of Chile — arose from at least three migrations, with the majority descended entirely from a single group of First American migrants that crossed over through Beringia, a land bridge between Asia and America that existed during the ice ages, more than 15,000 years ago.

By studying variations in Native American DNA sequences, the international team found that while most of the Native American populations arose from the first migration, two subsequent migrations also made important genetic contributions. The paper is published in the journal Nature July 11. . . . Read Complete Report

Three-toed horses reveal the secret of the Tibetan Plateau uplift 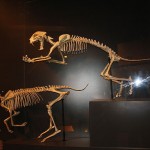 The Tibetan Plateau is the youngest and highest plateau on Earth, and its elevation reaches one-third of the height of the troposphere, with profound dynamic and thermal effects on atmospheric circulation and climate. The uplift of the Tibetan Plateau was an important factor of global climate change during the late Cenozoic and strongly influenced the development of the Asian monsoon system. However, there have been heated debates about the history and process of Tibetan Plateau uplift, especially elevations in different geological ages.