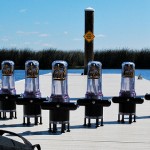 BERKELEY – A fleet of 100 floating robots took a trip down the Sacramento River today (Wednesday, May 9) in a field test organized by engineers at the University of California, Berkeley. The smartphone-equipped floating robots demonstrated the next generation of water monitoring technology, promising to transform the way government agencies monitor one of the state’s most precious resources. . . . Read Complete Report w/Video

For some time now, scientists have assumed that dinosaurs’ tails didn’t simply drag on the group behind them, but were instead held out to serve as a counterweight for the giant reptiles’ heavy front ends when running. More recently, however, researchers from the University of California, Berkeley, have discovered that modern-day lizards also use their tails to control the orientation of their bodies when leaping through the air. It’s a discovery that could be applied to devices such as search-and-rescue robots, and in fact already has been. Based on their observations, the UC Berkeley team created a small, tailed robot known as Tailbot. . . read complete report