Your Second Chance for a Classic: Shavertron ~The Mimeograph Years ~ Authored by Richard Toronto Edition: 1

Richard Toronto’s Shavertron magazine is a one-of-a-kind fanzine continuation of Richard Shaver and “Shaver Mystery.” Whether  you know of Richard Shaver’s work or not, you’ll be amazed at the information contained in every issue of Shavertron. I thank Mr. Toronto for bringing this great fanzine back in its new format. . .”Highly recommended.”   “*****” . EDITOR 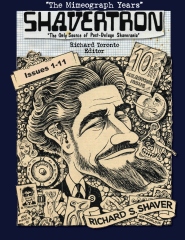 “Shavertron became the longest-lived Shaver Mystery fanzine, with 29 issues to its credit. Out-of-print for nearly 25 years, this elusive icon of the Shaver Mystery saga is now being offered in three volumes, the second and third to appear in 2014.” . . . Read more and order at  Shavertron Vol. 1.

HOLLOW EARTH ;My encounter with a Dero

A story of an encounter with 3 different beings while I lived in Texas and reading a book 15 years later and seeing a picture of the exact thing that had grabed me and more details like this. Enjoy the true story and comment if you have seen this type because i would like to know and I will answer any resonable questions .thanks.

Visit “Shavertron: The only source for Post-Deluge Shaverania” 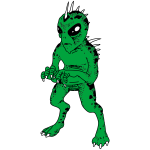 Featured Image: Graphic depiction of a Chupacabra, image drawn by user LeCire for its use on Wikipedia. (Public Domain)

Category: It's a Strange World After All / Tags: Chupacabra, Classic, Cryptids, video report