High in the Sky and other Marijuana Updates (+) Selected Short subject

High in the Sky: Pot Falls From Plane Near U.S.-Mexico Border
Bundles of pot fell from the sky over San Diego, arriving in an airdrop from a plane that originated in Mexico, federal officials said Tuesday. . . Read Complete Report

DENVER (CBS4) – A Denver City Council committee is talking about changing the city’s odors laws weeks before recreational marijuana is to become legal and go on sale. . . . Read Complete Report

Marijuana News You May have Missed (+) Hemp for Victory – Filmed in 1942 by the US Government!

Top 10 Cannabis Studies the Government Wished it Had Never Funded

10) MARIJUANA USE HAS NO EFFECT ON MORTALITY: A massive study of California HMO members funded by the National Institute on Drug Abuse (NIDA) found marijuana use caused no significant increase in mortality. Tobacco use was associated with increased risk of death. Sidney, S et al. Marijuana Use and Mortality. American Journal of Public Health. Vol. 87 No. 4, April 1997. p. 585-590. Sept. 2002. . . . Complete List

From Salon BY NATASHA LENNARD

A federal court Monday sentenced a California man to 10 years in prison for doing something that’s legal in his state. Aaron Sandusky was convicted in October on federal charges of distributing marijuana — he is one of four defendants in the United States who have faced federal prosecutors over medical marijuana dispensaries in states where medical marijuana is legal.

According to reports, Sandusky told the courtroom Monday, “I want to apologize to those with me and their families who have been victimized by the federal government who has not recognized the voters of this state.” . . . Read Complete Report

Are we on the verge of an American hemp renaissance?

From Salon  by BY KRISTEN GWYNNE, ALTERNET

Kentucky was America’s leading hemp producer in the early 19th century.  Now, 200 years later, after a historic election for drug policy has led to a shift for marijuana policy reform in America, Kentucky lawmakers are taking steps to revive the crop. 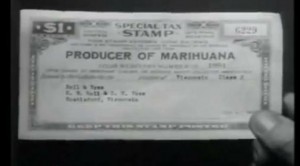 While advocates for hemp legalization say the plant could bring a wealth of green jobs to Kentucky, deep-rooted drug stigma and conflict with federal law have made passing the legislation unlikely. Nonetheless, two state bills are in the works, while a federal proposal aims to clear the way for state legalization. Lawmakers suggest the bills could at least open up the conversation about hemp, and clear up misconceptions about its use. . . . Read Complete Report

Washington, DC: A three-judge panel of the U.S. Court of Appeals for the D.C. Circuit heard arguments on Tuesday in support of reclassifying cannabis under federal law. . . . Read Complete Report

Washington, as you may know, is a vote by mail state. As such, the official fall ballots will be arriving in Washington voters’ mailboxes over the next several days. With the votes about to begin flowing in, Washington’s initiative to regulate marijuana is still holding a solid lead in two recent polls. . . . Read Complete Report

Despite indoor marijuana-growing operations having been the source of numerous local fires in recent years, city efforts to create an ordinance regulating these gardens have died due to the ongoing conflict between state and federal law.. . . Read Complete Report