Here are the Newest Additions to the Robot Hall of Fame 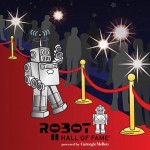 The official induction ceremony for the Robot Hall of Fame took place at at Carnegie Science Center in Pittsburgh last week. Over 17,000 people cast votes online to choose which are the four best robots of 2012, and which robots totally suck. We kid! If it was up to us, all of these robots would have made it in, and we’re still holding out hope that a few of them will come back for the next round. But until that happens, here are the winners, along with some of our favorite video clips. . . . Read complete Report w/video clips