David Knight takes the studio for Alex discussing the topics of The UN, NAFTA, the north american union and it’s correlation to the recent wave of immigrants coming from mexico and south america and the plan to crash the american economy creating a subservient lower class. 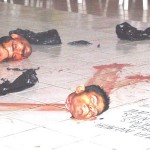