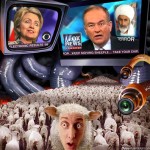 will use its usual satirical approach to real world news to help sell Obamacare to the good (young) people of Illinois. Oh the irony.

Illinois partners with The Onion to push Obamacare enrollment

February 10, 2014|By Peter Frost | Tribune reporter
Illinois officials are hoping headlines like “Recently Insured Man Can’t Wait To Get Out There, Start Seriously Injuring Himself,” and “Man Without Health Insurance is Forced to Sell Action Figures to Pay Medical Bills” will bring the right blend of comedy and news to persuade more young people to sign up for new health coverage.
Read the rest of the Chicago Tribune story HERE
Category: The Humor of it All / Tags: chicago tribune, illinois, obamacare, satire, the onion

Is Starbucks Next Up for Mandated Services?

Thanks, Blaine and Third Watch Productions

(Satire) In an effort to Glamorize Obamacare and cater to the kids The Obama Administration has released a new mascot in order to get young children into the act of giving their personal information to untrained and sometimes criminal strangers. This information could get sold to telemarketers.

Category: The Humor of it All / Tags: Mascot, New, obamacare, satire

ObamaCare: What You’re Not Being Told

Let’s take a look at ObamaCare without the party politics.

“CGI Federal, which secured a $678 million no-bid contract to build the Obamacare exchange web portal, has come under increased scrutiny for ties between senior executives and the Obama administration following the disastrous rollout of the healthcare website.

“Toni Townes-Whitley, a senior vice president at CGI Federal, is a Princeton classmate of First Lady Michelle Obama, the Daily Caller reported. In addition to being college classmates, both Obama and Townes-Whitley are members of the Association of Black Princeton Alumni.” . . .
. . . “In addition to the $88 million contract awarded to CGI Federal for the health-insurance exchange website, the company has received a total of $422 million in contracts related to Obamacare since the legislation was signed into law, according to Bloomberg News.” . . . Read Complete Report

Dobbs: Every Single Promise Obama Made Campaigning For Obamacare 2009 & 2010 Didn’t Come True!
Dobbs: Obamacare What Ever Else You Want To Call It It is Not Socialize Medicine, This is The Most Upside Down Peculiar Contraption!

There is no impending government shutdown — only a government slowdown. The threat of a “shutdown” is designed to scare voters while avoiding scrutiny of reckless government overspending.

If federal lawmakers do not pass a budget or a “continuing resolution” (CR) by Oct. 1, a government spending slowdown will take effect. This could halt almost $1 trillion in annualized spending that the CR would authorize, which is the size of the current federal deficit. If made permanent, this would cut annual federal spending by approximately 27 percent to $2.7 trillion — the current level of revenues coming in.

In other words, a federal slowdown — if allowed to take full effect — would balance the federal budget. This would greatly benefit the U.S. economy. . . . Read Coomplete Press Release

Category: The Humor of it All / Tags: obamacare, Take Ten Pills, You're Fine

IRS Workers Want Out of Obamacare

The federal employees who will be responsible for administering Obamacare for the American people don’t want it for themselves.

The National Treasury Employees Union, which represents workers at the Internal Revenue Service, is asking its members to write letters to Capitol Hill saying they are “very concerned” about legislative efforts requiring IRS and Treasury employees to enroll in the Obamacare exchanges.

“I am a federal employee and one of your constituents,” one letter begins, Forbes blogger Avik Roy reported on Friday. “I am very concerned about legislation that has been introduced by Congressman Dave Camp to push federal employees out of the Federal Employees Health Benefits Program (FEHBP) and into the insurance exchanges established under the Affordable Care Act (ACA).” . . . Read Complete Report