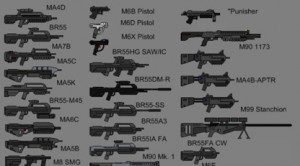 Joe Eskenazi, a columnist for SFWeekly.com, took a lot of heat from several members of the gun community for his decision to use a picture of Rambo and a picture of guns from the videogame HALO to make a point about a lawsuit over the clarity, or lack thereof, of California’s Assault Weapon ban.

Read the rest of this guns.com piece HERE

And now, my take:

Reporters should be banned from writing stories on topics with which they have zero experience. If a reporter is assigned to do a story, they have the responsibility to become aware of the issues as well as the facts before turning in their piece.

Having fired a great many real assault weapons, up to and including grenade launchers, true machine guns (light, intermediate, and heavy), and heavy sniper rifles, I can say with confidence that nothing like that is available at Gander Mountain. But they should be. Okay, maybe not the grenade launchers.

The liberal media bias against all private gun ownership is a nonsensical belief that Big Brother will protect us from all harm. The very meaning of the word “liberal” is at odds with that belief. When Gary Hart dreamed up the Department of Homeland Security and George W. Bush signed the so called Patriot Act, it had nothing whatsoever to do with international terrorism. Its only reason for being is to allow the State’s terrorizing its own citizens with minimal resistance. It is designed solely to prevent domestic unrest that could lead to, well, the fall of the Federal government from within.

Some would look at the faked assault weapon story as a singular anomaly. It is a symptom of a disease known as simple-mindedness. It is incurable and it is terminal.