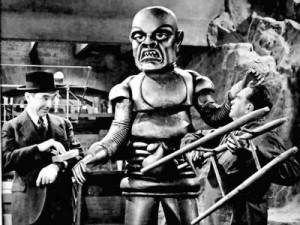 Photo: From the movie The Phantom Creeps (1939) BONUS! Link to full movie.

Over the decades, technology has progressed faster than any other time in human history. Electronic machines are being used to improve our everyday lives and it is believed that by 2045 humans will become one with machines. RT’s Liz Wahl has more on the future of the human race.
RT America LIVE http://rt.com/on-air/rt-america-air/
Subscribe to RT America!http://www.youtube.com/subscription_center?add_user=RTAmerica

While the first characteristic requires little explanation, the 2nd characteristic is a compelling and competitive advantage of HULC™ completely absent in any other exoskeleton system. During preliminary evaluations, oxygen consumption of users walking at a speed of 2 MPH, decreased by 5%~12% when using our Alpha test unit without a payload. When users carried a load, the effect was more pronounced. The oxygen consumption of these users carrying an 81 pound approach load at a speed of 2MPH decreased by about 15% when using the prototype HULC™ . . . Read Complete Report W/additional video