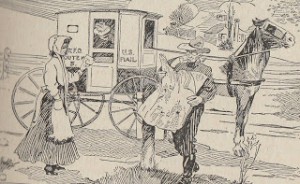 I’m glad they caught her, but the method used is just another peek at our ever  increasing government’s “Big Bro” system of spying on American’s. Scary stuff. . . . EDITOR

In a U.S. District Court complaint filed today against Shannon Guess Richardson, an FBI agent details how investigators traced the ricin letters back to NewBoston, Texas, where the 35-year-old Richardson (seen below) lives with her husband. . . .  Read Complete Report