Earliest Use of Mexican Turkeys by Ancient Maya (W/Video) 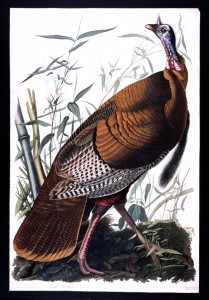 I have long maintained that the Turkey should be the United States official bird as opposed to the Eagle.  After, all it was the meat of the turkey that filled the bellies of the first European raiders in the country.  The Eagle was picked because it represents power . . . aggressive power, but the turkey was, without argument the first most important American bird to the first settlers. . .EDITOR

ScienceDaily (Aug. 8, 2012) — A new University of Florida study shows the turkey, one of the most widely consumed birds worldwide, was domesticated more than 1,000 years earlier than previously believed.

Researchers say discovery of the bones from an ancient Mayan archaeological site in Guatemala provides evidence of domestication, usually a significant mark of civilization, and the earliest evidence of the Mexican turkey in the Maya world. The study appears online inPLoS ONE.

The discovery of the turkey bones is significant because the Maya did not use a lot of domesticated animals. . . . Read Complete Report

Turkey: The Other National Bird

Uploaded by LaughingHistorically on Nov 20, 2011

In this special Thanksgiving episode, Nevin and Brandon tell the story of how the turkey almost became The United States of America’s national bird instead of the bald eagle (if Ben Franklin would have had his way that is). . . Text posted with video