Scientists have discovered a layer of liquified molten rock in Earth’s mantle that may be responsible for the sliding motions of the planet’s massive tectonic plates. The finding may carry far-reaching implications, from understanding basic geologic functions of the planet to new insights into volcanism and earthquakes.

The research was funded by the National Science Foundation (NSF), and is reported in this week’s issue of the journal Nature by Samer Naif, Kerry Key, and Steven Constable of the Scripps Institution of Oceanography (SIO), and Rob Evans of the Woods Hole Oceanographic Institution. . . . Read Complete Report 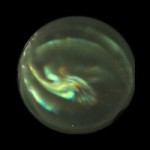