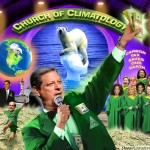 – Alan Caruba  Wednesday, May 16, 2012
What is it with the “warmists”, Al Gore and his clones who keep insisting the Earth is warming, that too much carbon dioxide (CO2) will be the death of us, and that we have to immediately stop burning “fossil fuels” if we are to save the planet? They are the most relentless liars on the face of the planet.They want us to cover the surface of the U.S. with solar panels and the mountains with wind turbines to generate the energy needed for everything we do. These Green energy alternatives are so wonderful they are producing a mere three percent of our current needs, require government subsidies and loan guarantees to exist, and tend not to be all that great when the sun isn’t shining and the wind isn’t blowing.

So why are we still hearing from this discredited and disgraced bunch of charlatans and buffoons? . . . Read Complete Report